What is a rebalancing?

In this post we will discuss how rebalancing works.

First things first, every consumer group is in one particular state. Allowed states are defined in GroupMetadata class, and you can check it out in Kafka’s github. You will see all possibilities. We can see that there are 5 of them, and thanks to verbose comments for each state, we can easily tell what they mean:

Let’s forget for a minute about two states in rebalancing and treat it like one state - simply rebalancing state. The transitions of consumer group are easy to depict on a state graph (duh!). 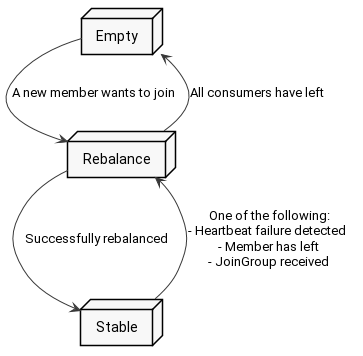 Of course if all consumers have left the group, then it is again in the Empty state.

What happened to the Dead state? Actually it can be reached from every other state, so for readability I have omitted it on the graph. It is not particularly stunning, so we will not discuss it further in this post.

Why two states for rebalancing?

Why? Well, rebalancing is all about preparing new assignment of partitions, so first it needs to gather members of the group and then assign chunks of the topic, thus two phases. In PreparingRebalancing group is waiting for consumers to join and in CompletingRebalancing it gives out an assignment.

Having discussed a high-level overview of the rebalancing, let’s immerse ourselves in the actual code. It might feel a little vague though. This is due to the distributed nature of the process. Unfortunately, several nodes take part in it, so the code is partially on consumer side as well as on broker side. Nevertheless, it is fairly educative to see what is actually sent in between the client and the server.

We start with the brand-new consumer. On the first poll, it wants to join the group. Remember ensureActiveGroup method from the previous post? Few levels below, it calls sendJoinGroupRequest method, which looks like this (source code):

After providing aforementioned details, consumer waits for the response. Kafka on the other hand starts a timer for the first phase of rebalancing, it closes the connection to the old members and waits for them to rejoin. Question is, for how long?

Kafka remembers all the old members and all their rebalance_timeouts (see aforementioned JoinGroup field). Since rebalance_timeout is a time for consumer to finish its processing and call poll again (and only in poll can it rejoin the group), then broker has to wait for the max(rebalance_timeout) to give a fair chance for all the members.

After this time is up, Kafka will respond to all consumers, and switch the group to CompletingRebalance state. The response is called JoinGroupResponse and it looks like this:

What should you note from this structure?

What does the consumer do to handle such response? Here comes the JoinGroupResponseHandler (source code)

A lot of happening here, right? To be honest the only crucial part is the if in line 12. The consumer checks here if it has been chosen a leader and acts accordingly. We will discuss follower first, and then a leader.

What does the follower do?

Let’s assume that this consumer has not been chosen a leader, so we move to onJoinFollower (source code)

And for sendSyncGroupRequest in line 7 (source code):

Consumer sends SyncGroup message, which is a request for the partition assignment, and it looks like this (documentation):

Again, we enclose the group_id and consumer’s member_id. Group assignment is empty in case of the follower, so the only meaning for this message is simply asking for partition assignment.

As you might have spotted, consumer also registers a handler SyncGroupResponseHandler which will take care of the received assignment. Kafka will wait with answering until it gets the assignment from the leader, so let’s leave the follower waiting for the response, and head over to the leader code.

What does the leader do?

Consumer received JoinGroupResponse and in the field leader_id there is a value matching member_id which means this is the leader, so we jump to onJoinLeader method (source code)

Similarly, to the follower, leader also awaits the SyncGroup response, and upon receiving it, it can start to fetch messages as a normal consumer.

What strategy is used for assignment?

The most important thing to do for the leader is performing assignment, thus I highlighted the performAssignment method. How exactly does it work?

Here comes the Assignor. This is a special class, that is responsible for assigning partitions to consumer group members. Default assignor is a RangeAssignor, and there are few others to choose from.

Since performing assignment is a leader’s job, and leader is a consumer, it means that you can replace the assignor implementation with your own custom one without making changes to the broker itself! Just change the partition.assignment.strategy parameter of your consumer.

Why would you want to do that? Maybe you want to introduce lag-based strategy? Maybe you are doing some canary deployment and want to redirect 10% of your messages to the new version of your service? Choice is yours, just change the assignor in your consumer.

Ok, so right now all the followers have sent SyncGroup requests, as well as the leader have sent SyncGroup with the assignment for the whole group. What broker has to do is to take the received assignment and send responses to all the consumers about their partitions. The messages are called SyncGroupResponse, and it looks like this:

Consumers (both leader and followers) find their partitions in member_assignment field. Right now they can start fetching data from those. The group is stable!

We have touched a lot of new stuff in this post, at the same time introducing rebalancing, which is not a trivial process, so let’s wrap up what we know. 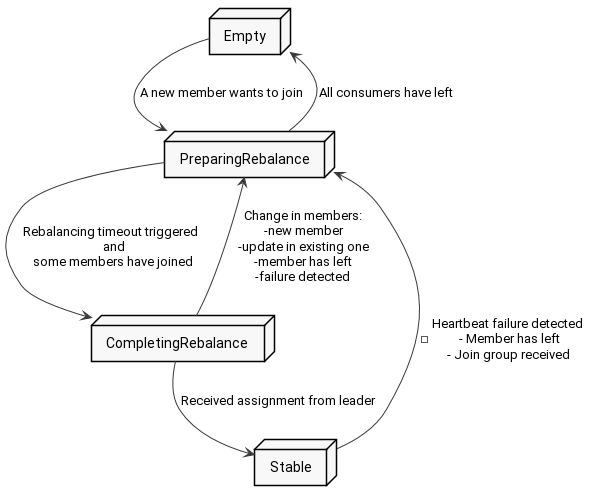 At last, here is the icing on the cake - the whole rebalancing as a sequence diagram. 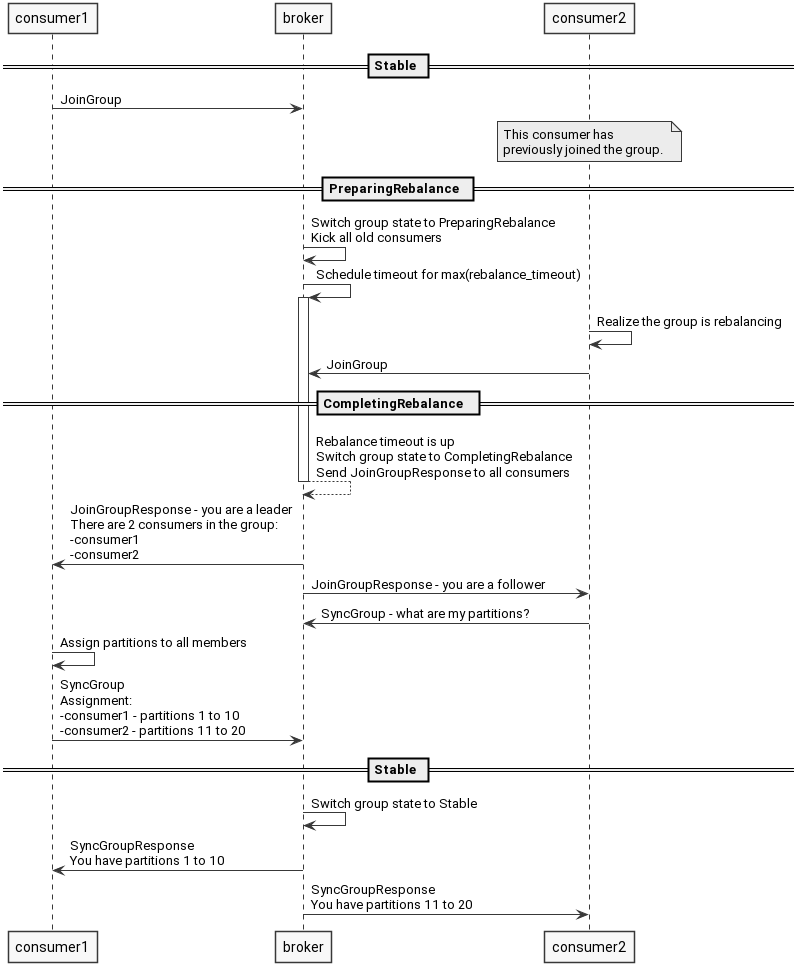