In the previous post we’ve discussed what Kafka is and how to interact with it. We explored how consumers subscribe to the topic and consume messages from it. We know that consumers form a group called consumer group and that Kafka split messages among members of the consumer group.

That’s of course after the initialization is finished, but what exactly is done in the background when you create a new consumer and call the very first poll? We’ll discover internals of it in this post.

We will investigate some code today, so if you want to check the examples be sure to head to the GitHub repo. You will find there some Kotlin code with a simple producer that sends a few messages to Kafka, as well as simple consumer that continuously fetches records from Kafka and prints them to the console.

To make setup easier I’ve included docker-compose file, so you can make your kafka cluster up and running in seconds. Just run the following command from the repository directory:

After that, you can run one of the main methods - one for a producer, and the second one for consumer - preferably in debug, so you can jump straight to the Kafka code by yourself. Anyway, I will cite crucial code, so you can go on and read without cloning the repository.

For better understanding I’ll cite some Apache Kafka code. You can find it on their github.

If you head over to Consumer class in the sample repository, you’ll find that the run method does exactly that:

Let’s break down every step and see what is done underneath.

What happens when you create consumer?

To start using consumer you have to instantiate your consumer. Pretty obvious right? As easy as it sounds, you have to set at least a few options to get it working. Let’s head over to Consumer class and check how to create our first consumer.

We set 4 properties. All of them are necessary - in fact, you’ll get exception if you don’t set them!

Ok, so we instantiated a new consumer. What happened under-the-hood of this simple constructor? Well… not gonna lie to you - nothing happened. We just created a whole tree of objects behind the scenes, but nothing extraordinary has been done apart from validation.

After creating the consumer, second thing we do is subscribing to set of topics. In the example we subscribe to one topic kafka-example-topic.

What happened here? Nothing much! Just a few values set here and there.

This part is more compelling if you have live consumer that is already subscribed to something and is already fetching something. However, we’ve just created consumer so nothing really happens.

What happens when you call first poll?

Here things become serious! As they say, code is worth a thousand words, so we will look into the code of Kafka Consumer (version: 2.2.0, you can access it on Github). For the sake of readability I’ve skipped some comments to focus on the important parts.

A lot is happening here! Nevertheless, important things poll method does are:

updateAssignmentMetadataIfNeeded method (source code) is quite simple and basically it delegates stuff to the coordinator (which is one of the classes in Kafka Consumer).

Updating positions is pretty straightforward, so let’s skip this part and focus on updating coordinator. Let’s jump down to implementation. What does the coordinator’s poll do? Code cited below (with comments removed for enhanced readability). Original source code is here

You may wonder, why should consumer report that? In fact, calling poll method is your responsibility and Kafka doesn’t trust you (no way 😱!). As a precaution, Consumer tracks how often you call poll and if you exceed some specified time (max.poll.interval.ms), then it leaves the group, so other consumers can move processing further. You’re still asking why? Imagine your processing thread has thrown an exception and died, but the whole application is still alive - you would stall some partitions by still sending heartbeat in the background. The only solution would be to restart the application! In fact that’s something I did, but more on that in different post.

* Not exactly random, but that’s far from crucial here.

There is even more happening here than in Consumer’s poll. However key points are:

There is a small but important detail about ensureActiveGroup method. It starts a heartbeat thread! Code

If that method finishes successfully, the consumer is fully initialized and is ready to fetch records. On every poll this process is repeated if it’s needed - for example we’ve dropped out of group or lost connection, etc.

We’ve ran through Kafka Consumer code to explore mechanics of the first poll. Let’s wrap up the whole process. Below is the sequence of steps to fetch the first batch of records. As you see in the first poll we fetch cluster topology, discover our group coordinator, ask it to join the group, start heartbeat thread, initialize offsets and finally fetch the records. 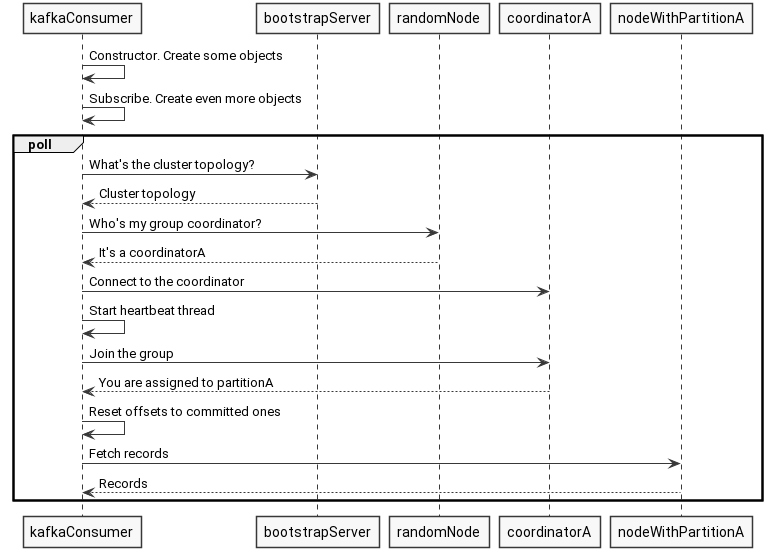 What can we conclude from inspecting the first poll of Kafka consumer?

What is missing from our journey and what I’ve explicitly omitted is:

Both require separate post, so I’ll cover those in the future posts, so stay tuned 😄. However, for now we know how consumer makes first connection to the cluster and what it has to initialize to do so.