In the previous post we’ve discussed how does Kafka Consumer work underneath. Now we know what are the very first steps to fetch records.

Remember what I’ve intentionally omitted from previous post? That’s right! Heartbeat thread. We will investigate what it does exactly and how it works in general.

If you want to run some samples on debug to discover heartbeat code by yourself, please by all means use my simple project on this GitHub repo. This is the same repo as in previous post.

Similarly, to previous post I’ll cite some Apache Kafka code. You can find it on their github.

What is a heartbeat?

We’re working in a distributed system. We have our business application working on one server and Kafka is running on a different server. In such a configuration how can Kafka tell if your application with consumer is still working? If it isn’t, maybe coordinator should evict consumer from the group to give some partitions to the rest of the consumers, so the processing can go on?

Obviously the easiest solution is to send some status updates via network saying that we’re still alive and evict each other based on some sort of timeouts. So if consumer didn’t contact Kafka in time then let’s assume it is dead, otherwise it is still up and running and is a valid member of its consumer group. This is called heartbeat. 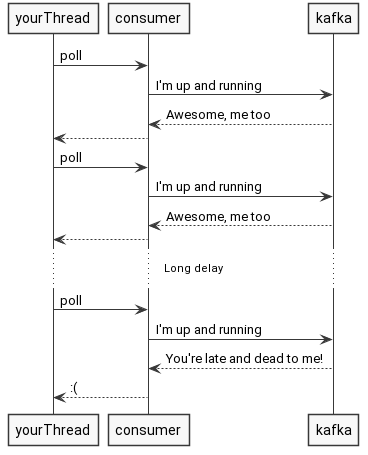 That might work great provided you call your poll frequently or specify long timeout, right?

As easy as it sounds, it might be a little bit tricky. If your processing takes a lot of time, then you have to specify long timeout, and you end up with a system that takes minutes to detect failure and recover from it. It has to work like that, since the system is not sure if you’re dead, or you’re just processing records longer.

That’s why in KIP-62, the background thread has been introduced. So instead of waiting for you to call poll, this thread takes care of notifying Kafka we’re working just fine. So if your whole process dies along with heartbeat thread, then Kafka will quickly discover that, and it is no longer affected by the time you spend on processing records, since the heartbeat is sent asynchronously and more often - awesome! 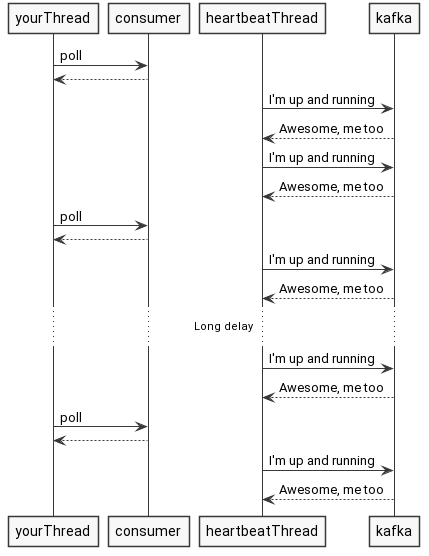 Ok so now we understand there is a heartbeat thread in the first place, but when does it start and what exactly it does? Let’s check it out!

When does the heartbeat thread start?

You can recollect from previous post that we already spotted the starting place, but for the sake of completeness of this post let’s cite the code again.

Every time you call poll, consumer also polls for coordinator events, and it basically does this (original code):

So if we’re using auto-assignment (lets assume that we do, because manual assignment is a different story), then consumer checks if it needs to rejoin the group. That might be the case if some changes were done (Kafka evicted us from consumer group, we changed the subscription for this consumer). If that’s true then we want to ensure that the consumer’s membership in the consumer group is active, and it is ready to fetch some records. Inside ensureActiveGroup method, just before joining the group, consumer starts heartbeat thread if it was dead before (original code)

As you see the heartbeat thread is started upon calling poll provided there were some changes made - it might be because we changed subscription, our assignment has been changed, we were evicted from group, etc. It is also the case at the first poll.

What does the heartbeat thread do?

Knowing when this thread starts, you’re probably wondering what it does? Without further ado, let me introduce the code! I’ve removed some unimportant code for the sake of readability, and as usual here is the original code

At the first glance we see that heartbeat is basically a giant loop that performs several checks every run. Let’s split this humongous code and inspect it bit by bit.

First things first, thread needs to know if it should run at all, hence 3 conditions:

What is the meaning of those 3 ifs?

Give some time for a network I/O

After preliminary checks, heartbeat thread gives a little bit time for network client to send and receive messages as well as handle disconnects. It might be the place where coordinator is discovered to be dead. All of this is done in the single line here:

Check the state of the world

Ok so in the place of a comment from listing above, comes the actual sending of heartbeat and handling of its response.

What’s going on? Let’s dig in

The last thing left is handling the errors. A funny thing is that all of that catch phrases are outside of a while loop, so any exception results in death of heartbeat thread.

Why is that? If you take a look at the expected exceptions you can see that they’re mostly errors that won’t happen in the middle of being active member of a group. They’re either some group access problems or exceptions that shouldn’t normally occur.

You might be thinking, can you do anything about those exceptions? Yes you can. As you see the exception that occurred is set as a failed reason. This failure is then read by your thread calling poll:

As you see, if failure is detected then reference to the heartbeat thread is cleared and failure cause is thrown. So all in all if you want to handle exceptions from heartbeat threads you have to wrap your poll call in a try-catch. New heartbeat thread will by spawned in one of the next polls (coordinator will spot missing heartbeats and evict consumer, triggering rejoin on our side)

As a bonus I can share with you a story why it is crucial to close your consumer even if you’re using it during the whole lifetime of your application.

I used to have an application that was spawning a consumer at the start to fetch some records from kafka. It was a constant stream of records, so I didn’t care about closing the consumer.

On the other hand I had the integration tests that restarted spring context between suites, but all within the same process. Due to the asynchronous nature of Kafka processing, my tests heavily relied on awaitility and proper timeouts.

At first there was no problem. Tests were running just fine. However, after adding n-th test I’ve spotted that I’m getting random build fails, which were caused by random test failures.

After a lot of debugging, I’ve realized that tests are running fine if I increase the timeouts to ridiculous value like 40-50 seconds.

Long story short, as you probably have guessed, the problem was with the consumer not being closed. Since the Spring context was being restarted, new consumer were spawned, and because of old ones still being active in the background, the rebalancing took a lot of time, because Kafka was waiting for old consumers to reach their poll methods and take part in rebalancing (welcoming the new consumer to the group).

Since old processing threads were dead, Kafka never received join group message from the old consumers (it still received heartbeats though). After waiting for session.timeout.ms and not seeing old consumers reaching poll, kafka decided to kick them out, continue rebalancing, and ending up with a stable group with only one member - the new consumer for the current suite.

That explains why increasing timeouts to high values “solved” the issue. After fixing the root cause, and closing consumers properly I’ve lowered the awaitility timeouts and no tests were failing randomly.

That’s all of the heartbeat thread mystery and magic. I believe we have a solid grasp of what this mechanism does and why it is important.